I have a new addiction...I know it's completely random, but it incorporates my love of history and things that are cool. I've decided to start a collection, which is a pretty big step for me because I'm not a collection having kind of girl. Unless you count Cabbage Patch Kids (elementary school), converse (middle school), stamps (dare I say high school...yeah, I was cool),  and snow globes (what was I thinking?!?)
So back to it, my new addiction, obsession, infatuation, and hopefully collection are Japanese Glass Fishing Floats. When it comes to things like this I am generally a day late and a dollar short. I am so unlike Marlene who wears clothes a good year or two before they are trendy. I'm definitely a late bloomer, so if you know all about them then you can just stop reading here.
If not...
Japanese Glass Fishing Floats were once used by fishermen in many parts of the world to keep their nets afloat. Large groups of fishnets strung together, sometimes 50 miles (80 km) long, were set adrift in the ocean and supported near the surface by hollow glass balls or cylinders containing air to give them buoyancy. These glass floats are no longer being used by fishermen, but many of them are still afloat in the world's oceans, primarily the Pacific. The earliest floats, including most Japanese glass fishing floats, were hand made by a glassblower. Recycled glass, especially old sake bottles, was typically used and air bubbles in the glass are a result of the rapid recycling process. After being blown, floats were removed from the blowpipe and sealed with a 'button' of melted glass before being placed in a cooling oven. (This sealing button is sometimes mistakenly identified as a pontil mark. However, no pontil (or punty) was used in the process of blowing glass floats.) While floats were still hot and soft, marks were often embossed on or near the sealing button to identify the float for trademark.
Today most of the glass floats remaining in the ocean are stuck in a circular pattern of ocean currents in the North Pacific. Although the number of glass floats is decreasing steadily, many floats are still drifting on these ocean currents. Occasionally storms or certain tidal conditions will break some floats from this circular pattern and bring them ashore. They most often end up on the beaches of Alaska, Washington or Oregon in the United States, Taiwan or Canada. It is estimated that floats must be a minimum of 7–10 years old before washing up on beaches in Alaska. Most floats that wash up, however, would have been afloat for 10 years. Once a float lands on a beach, it may roll in the surf and become "etched" by sand. Many glass floats show distinctive wear patterns from the corrosive forces of sand, sun, and salt water. When old netting breaks off of a float, its pattern often remains on the surface of the glass where the glass was protected under the netting. Other floats have small amounts of water trapped inside of them. This water apparently enters the floats through microscopic imperfections in the glass while the floats are suspended in Arctic ice or held under water by netting. To accommodate different fishing styles and nets, the Japanese experimented with many different sizes and shapes of floats, ranging from 2 to 20 inches (510 mm) in diameter. Most were rough spheres, but some were cylindrical or “rolling pin” shaped. Most floats are shades of green because that is the color of glass from recycled sake bottles (especially after long exposure to sunlight). However, clear, amber, aquamarine, amethyst, blue and other colors were also produced. The most prized and rare color is a red or cranberry hue. These were expensive to make because gold was used to produce the color. Other brilliant tones such as emerald green, cobalt blue, purple, yellow and orange were primarily made in the 1920s and 30s.
no...I'm not that smart, information was copied and pasted from Wikipedia
﻿Marlene is going to make so much fun of me for this very nerdy post, but before you jump to any conclusions, check out these awesome pictures... 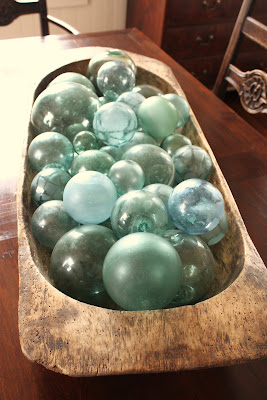 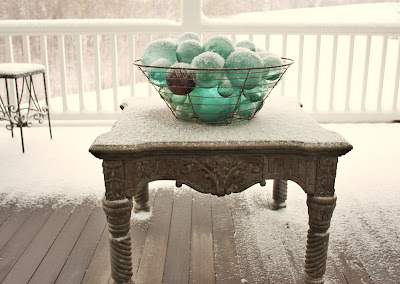 ﻿
﻿Thoughts? Comments? Concerns? Apparently these are pretty rare, although fakes (good ones and bad ones) are fairly easy to find. Is a good fake as good as an original? Would you know the difference? Would your friends? Does it matter...?

Posted by Accessorize and Organize at 8:00 AM

We just sold several of the glass fishing floats on Ebay. The person that bought them was SO excited and said that he had waited forever to find the "star" one. We had them in a trunk. So it worked out well for everyone! LOL They are really cool!