Have I mentioned how much I heart Pinterest? And blue doors? And Pinterest? And house numbers? Ok, so I probably haven't mention that I like house numbers. But, with my love for anything numbered, it's a given. It's  funny the order that things happen sometimes...

Yesterday I went to Lowe's to scout out a few things. While somethings didn't pan out, a few did. Ever since I painted our backdoor blue, I've been on the lookout for a nickel kick plate and numbers. The kick plate we need...it's amazing how dirty the bottom of a door can get...and the numbers I want. It's our backdoor, so I wasn't looking to spend a lot. I've found it hard (and expensive) to find a 30" kick plate and numbers can get pricey. But, to make a long story short, I found the numbers yesterday at Lowe's. They were $4 each and my total came to $17 and some change. I also found the kick plate but wasn't ready to spend $40 on backdoor accessories. And we have two backdoors, so really I would need two kick plates which would bring the total closer to $60...no thanks...

At some point during my Pinterest addiction I saw this...

Ok, some serious door number love going on there. But, to my surprise, when I clicked to read about it I discovered she had painted the numbers on her door...seriously! Why didn't I think of something so simple? Turns out I already had silver paint...so guess what...I went to work. Here's how it went down...

1. printed off the numbers from Microsoft Works.
2. cut out the numbers
3. taped the homemade stencil to the door
4. traced the numbers
5. filled them in

Here are the pictures: 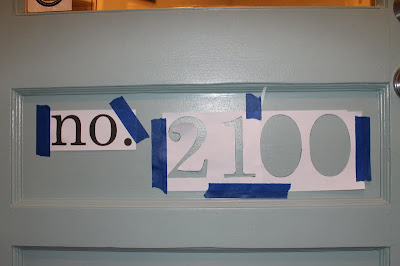 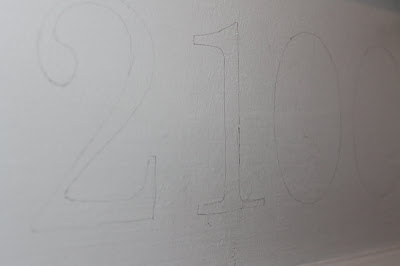 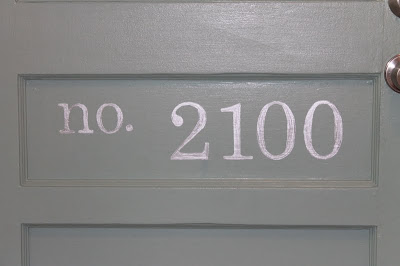 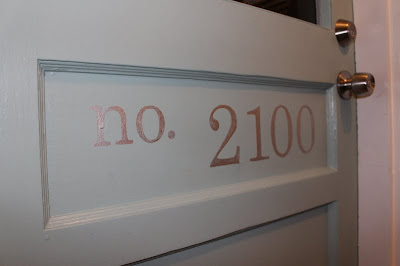 For the record, Mr. T wasn't crazy about the "no." part of this project. I thought it looked cute though, a litttle different, and not something you see everyday. These pictures pretty much stink...it's rainy and foggy and I still don't know how to work my camera. When the weather is nicer and I've put out some fall decor I'll have to take some more. Today's picture has to be taken from a low angle. I'm assuming that mean from the ground shooting up...? Maybe?... 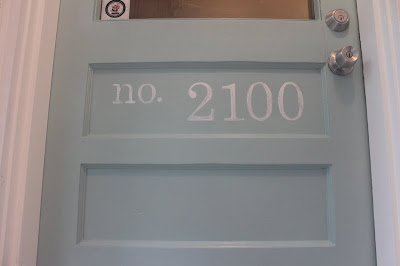 This project went from being almost $20 to free!! I love it when that happens!!

many thanks to Mrs. Limestone and Rachel from Pencil Shavings for sharing this great project with the rest of us who can come up with no good ideas on our own...

Posted by Accessorize and Organize at 11:34 AM

Have you looked at ebay for the kick plates? That's where I bought mine, all my door hardware actually.

Thanks guys!! I ordered 2 today from Amazon. They were 1/2 the price of what they are in the stores...yay!!

I think it looks amazing and free is the best! Good job!

Love it love it love it!! I wish we had a suitable door for this project, John would kill me if I tried it on our front door. You are the bomb. You are no. 1!

Love it! I totally have been wanting to do this to my front door.

ditto on the gratitude/recognition for those who can come up with fantastic ideas for those of us who cannot, i thank you:)