My Kind of Remodeling-Part Trois

I'm taking deep breaths as I write this...you will find out why in a moment.  So, quick recap, a client had a family stone he wanted to use in his fiancee's engagement ring.  He sent me a picture of a ring he liked and asked if we could copy it.  I said, "of course, custom work is what we do best"!  Here is the picture: 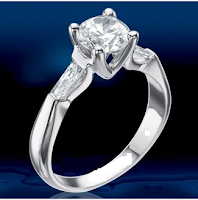 It is a very simple piece and Margie carved the wax by hand.  This is what it looked like: 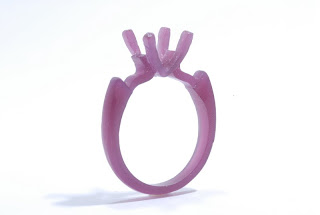 Before we ever proceed with casting the wax in metal, we always have the client come in and approve the design.  On this occasion, the client said there was something, "not quite right and can Margie tweak it".  I said of course, and she did.  He came back and finally approved it.
Here is the finished product: 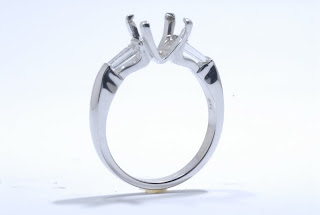 Here comes the kicker. We set his diamond in the center. I wrapped it up nice and pretty.  He opened it and...said it wasn't anything like the picture and he hated it.  Yes, you read that correctly.  I was stunned.  We ended up taking his stone out of the center and telling him it would probably be best if he went and bought the piece he originally saw-even though it was twice as much! I was furious but extremely profession (if I do say so myself).

The camera angles are a little off because I'm no professional, but what do you think?
So, here's kicker #2-he emailed me on Monday and asked if he could come in yesterday for a "do over".  Apparently over the weekend he went and looked at the original piece and realized that he was crazy and that there was no difference.  I got in my I-told-you-so and then had the jeweler put the stone back in the center. He went of on his merry way.  I was pretty pleased with myself until someone said, "you get that rush but then realize you've had to sell the same piece 4 times".  Thanks for raining on my parade!  Anyway, all's well that ends well!
XOXO,
Marlene

Posted by Accessorize and Organize at 6:00 AM