The only thing better than having a best friend that's a private jeweler...wait a minute...it really doesn't get better than having a best friend that's a jeweler. A few months ago I was reading Skinny Runner when she posted a blog with a picture of her jewelry box. As soon as I saw it, I fell in love with her watch. I didn't know what kind it was, all I had was a somewhat small picture of this random watch to go by. I called Marlene, told her to look, and right away she says...
﻿﻿

"Oh, that's a Michele watch."
I mean seriously, how does she know this stuff? I had tried to enlarge the picture, search for it online, pretty much everything except call in the FBI and she takes a quick glance at it and knows right away...Turns out she hearts Michele as much as I do, and she's known about them forever while I've known about them for about a nanosecond.
Fast forward to September...Mr. T and I are celebrating 12 years of marriage. The watch he had given me for my 21st birthday (it really wasn't that long ago) has seen better days, like when it would actually tell time, and he would like for me to have a new one. Being the wonderfully awesome husband he is, he calls my #1 BFF to get her input. I am pretty sure when he told Marlene what he wanted to buy she gave her deep Dr. Evil laugh because she knew just what to do.

The bad news is that on the morning of our anniversary Mr. T was out of town at a conference. The good news is that minutes after I opened my eyes, Brainy Smurf brought me this note: 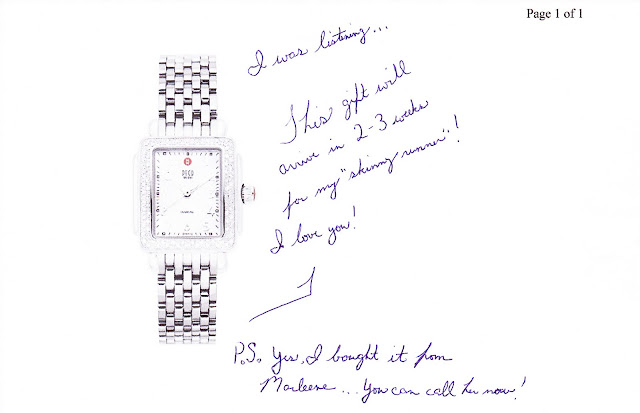 Turns out Mr. T does listen when I ramble on and on about randomness. Did you know that when lobsters mate, they mate for life? I lobster this watch. And Mr. T.

Posted by Accessorize and Organize at 7:30 AM