December can get a little crazy around here. Brainy Smurf turned 9 on the 18th. We celebrated by having a spend the night party for him and his 9 best friends. It was exhaustingly fun and everyone survived! Because of weeks of partying for Birthday/Christmas/Hanukkah the gift giving gets out of control! There wasn't much I could do when Smurfette told me she wanted to get Brainy Smurf this for his birthday: 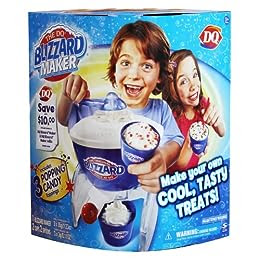 That's right...it's a Dairy Queen Blizzard Maker...what every kid wants! I would normally say, "NO!" but Smurfette talked about it for weeks before Brainy's birthday and she was so excited about giving it to him. Mr. T and I looked it up, researched it a little bit, and went out to find a Blizzard Maker for Brainy. I must be honest, I was dreading this gift. Smurfette had super high expectations and the reviews were terrible. Many of them stated that it made slush, had to be churned for 30 or more minutes (directions say 10), and was pretty much just cr@p. Oh well!
The birthday came and Smurfette was over the top excited! Brainy Smurf didn't seem that pleased. Looking back I should have realized that perhaps the little sister wanted it more for herself than her big brother! So, after dinner on Saturday night we set it up to make a few Oreo Blizzards...turns out, this little toy can churn up some pretty good vanilla ice cream in a few minutes. Each kids churned for 5 minutes and after 10, we had about 4 oz of vanilla ice cream to mix some Oreos in! I know 4 oz isn't a whopping amount, but it was just enough to satisfy these two kiddos and give them a little something sweet before bedtime.
Rachel :)﻿

Posted by Accessorize and Organize at 10:42 AM